We can’t do this alone. Here are the organizations that we affiliate with for mutual benefit and support. Check them out, they’re really cool.

The American Humanist Association is a national organization founded in 1941 to promote humanism in the United States.

Strategically located in Washington, DC, the AHA actively educates the public about Humanism, brings Humanists together for mutual support and action, defends the civil liberties and constitutional freedoms of Humanists, indeed of all peoples, and leads both local and national Humanist organizations toward progressive societal change.

Through a strong network of over 100 grassroots organizations, appearances in national media, an advanced Internet presence, regular public appearances, and a broad spectrum of publications, the AHA is the VOICE OF HUMANISM.

HSGP is a chartered member of the American Humanist Association. We operate completely independently but collaborate for common goals.

The Council for Secular Humanism

The Secular Coalition for Arizona 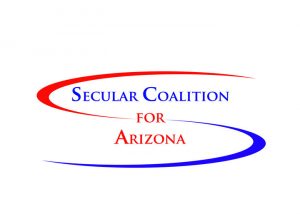 The Secular Coalition for Arizona is a 501(c)(4) nonprofit advocacy organization that works to ensure a secular state government. We lobby on behalf of all individuals – non-theists and theists alike – who believe that public policy free of religious preference is the best way to ensure freedom of conscience for Arizonans of all faiths and of none.

We also represent the Arizona non-theistic community — a vibrant and growing community of Arizonans who self identify as atheists, agnostics, humanists, freethinkers, and other labels of personal choosing — to elected officials and government bodies in and from Arizona. We mediate the relationship between the non-theistic community and elected officials, and work to ensure that the law is never biased to the detriment and interests of Arizona’s non-theists.