Winners to be announced today! 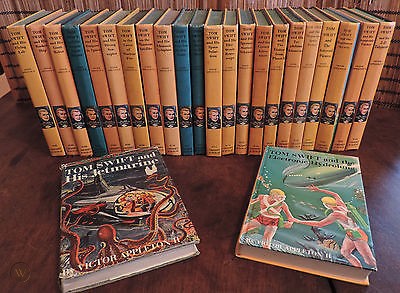 The Tom Swifty form takes its name from the main character in a series of adventure books published by Edward Stratemeyer beginning in 1910. The books were all credited to "Victor Appleton," a pseudonym, the books were actually written by several different authors. In the series, which had titles that included Tom Swift in the City of Gold, Tom Swift and His Wizard Camera, and Tom Swift and His Great Searchlight, the authors used an abundance of adverbs, in order to add color and variety to the narration.

But the all-time best Tom Swiftys are the ones that accurately describe the subject’s state of mind as well as the action such as:
"I just dropped the toothpaste," said Tom crestfallen.
You get the idea, here are a few more of my own devising that might inspire you:
“I expected a bigger bouquet,” she said morosely.”
“I just got my triple by-pass,” he said wholeheartedly.
“I’ve had a lobotomy,” he said absentmindedly.
“P-p-put on your gl-gl-gloves,” he stuttered intermittently.

They're fun and they'll help keep your mind sharp, particularly now that most of us are housebound.

NOW THE RULES:
1. Submit up to ten of your best efforts to: zenaido@aol.com by April
26th. (There are lots online, but make up your own!)
2. Jennifer and I will pick the best ten of all the submissions and send
them to every participant by April 30th.
3. The participants will rank them 1-10 with #1 being best and return
the ranked list to zenaido@aol.com by May 3rd.
4. The top 3 will win prizes to be announced after the top ten are
picked. Winners will be announced on May 8th!

Good luck and have fun!

Please help us and let your friends, colleagues and followers know about our page: Humanities Project: Zenaido's Tom Swifty Contest - Winners to be Announced!

You can also share the below link in an email or on your website.
https://hsgp.org/civicrm/event/info/?id=3543&reset=1
empowered by
CiviCRM