Sunday Speaker: Lee McIntyre – How to Talk to a Science Denier

The fight against science denial is most effectively waged not by flinging facts but through face to face respectful engagement, where trust can be built. Recent empirical and practical evidence has shown that even hard-core deniers can be coaxed to change their beliefs, if approached in the right way. 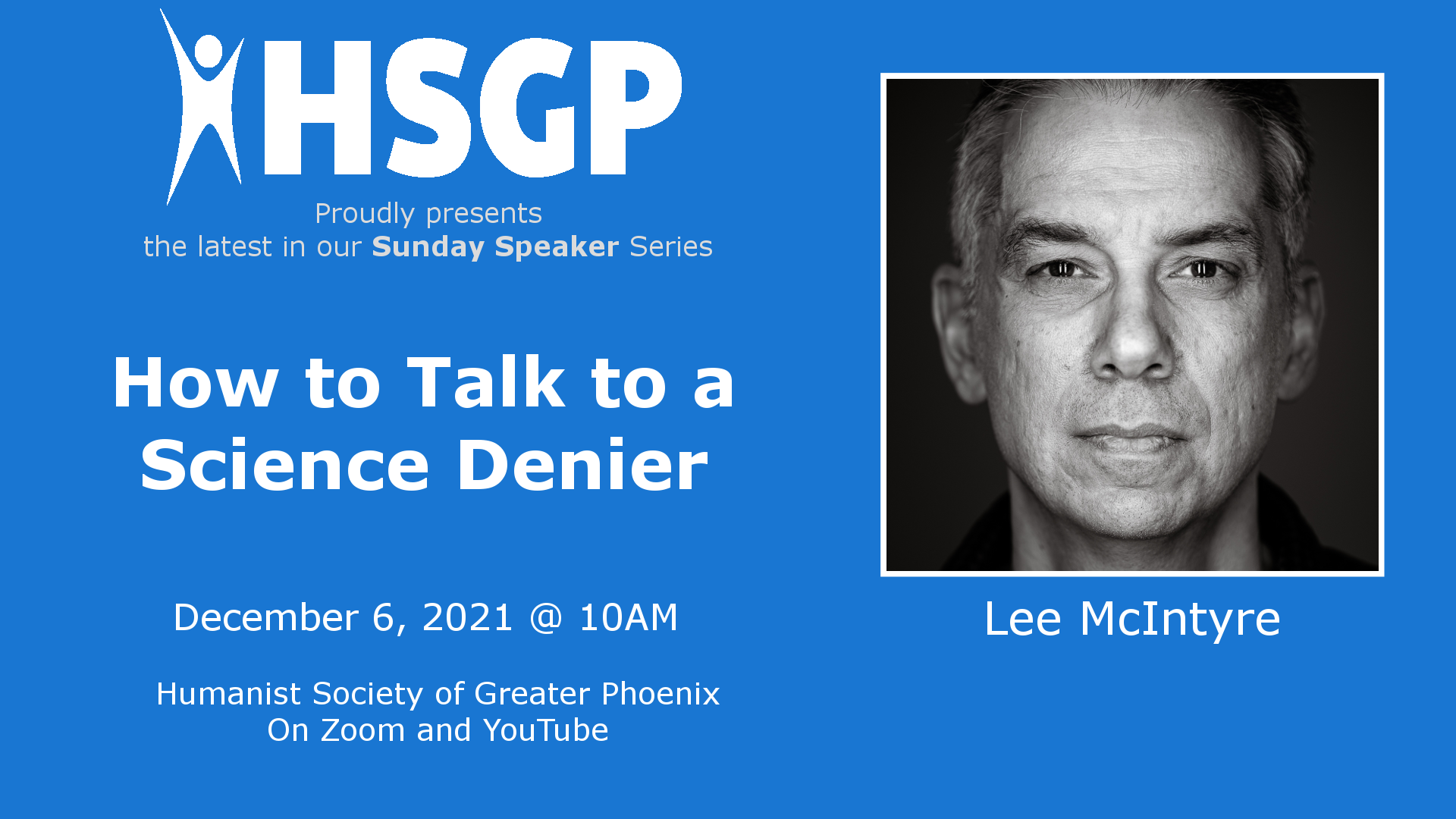 It is sometimes claimed that it is impossible to talk a science denier out of their beliefs. The latest research, though, shows that this is mistaken and that there are effective techniques that can be used to keep someone from becoming a science denier, and even to help them overturn mistaken beliefs once they have hardened.

The secret lies in recognizing that even empirical beliefs can be held for reasons that have nothing to do with evidence, such as personal values, trust, ideology, and group identity. The best way to convince someone is not to berate them -- or bury them with evidence -- but instead to engage with them in one-on-one (preferably face to face) conversation that is conducted with calm, patience, and respect.

Science denial is rooted not merely in doubt but distrust. Research has shown that all science denial consists of the same type of flawed reasoning: (1) cherry picking evidence, (2) belief in conspiracy theories, (3) illogical reasoning, (4) reliance on fake experts (and the denigration of real experts), and (5) belief that science has to be perfect. From climate deniers to Flat Earthers to Covid-19 anti-vaxxers, these five
tropes form a blueprint that traces its roots back to the beginning of modern science denial, when tobacco company executives in the 1950s hired a public relations expert to help them "fight the science"; which showed a definitive link between smoking and lung cancer.

It is helpful to remember that most science deniers are victims. They have been polarized and radicalized not merely through misinformation but disinformation, which has been intentionally created by those who have something to gain by getting others to have false beliefs about various scientific topics. These motives can be economic, but just as often are ideological or political.

There are no magic words you can say to convince a science denier. Instead, focus on your attitude and demeanor, in an effort to build trust, to help plant the seed of doubt that may later convince them. Listening is key. Every anecdotal account of a hard-core science denier who gives up their beliefs follow the same pattern: they hear the facts only when it is presented by someone who first treated them respectfully and gained their trust.

Lee McIntyre is a Research Fellow at the Center for Philosophy and History of Science at Boston University and a Lecturer in Ethics at Harvard Extension School.
He is the author of Dark Ages (2006), Post-Truth (2018), and The Scientific
Attitude (2019), all from MIT Press. His popular essays have appeared in the New York Times, Washington Post, Boston Globe, Baltimore Sun, Nature, Newsweek, Scientific American, and the Chronicle of Higher Education. He has appeared on CNN, PBS, BBC, NPR, and has spoken at the United Nations, the Aspen Institute, and the Vatican.

In 2018, he attended the Flat Earth International Conference in Denver, Colorado. He talks about this -- and his other adventures speaking directly to science deniers -- in his new book How to Talk to a Science Denier (2021), also from MIT Press.

2) YOUTUBE: You can watch live (15 second delay), or you can watch later. Here is the YouTube link: https://www.youtube.com/channel/UCOw8Sl1yofrwRuGUYS_OOOA

Need help? Email ron.russell@hsgp.org before the day of this meeting.

The Humanist Society of Greater Phoenix presents its Sunday Speaker meetings twice a month on Sunday mornings. For now our meetings are on Zoom and YouTube. We look forward to seeing you at the Humanist Community Center when it's safe to meet in person!

Meetings are free and open to the public.

Go to our YouTube channel to see past meetings, presentations and and interviews: https://www.youtube.com/channel/UCOw8Sl1yofrwRuGUYS_OOOA

We invite you to become a dues-paying member of HSGP. To become a member or make a donation, go to www.hsgp.org

When
December 5th, 2021 10:00 AM through 11:30 AM
Location
ONLINE
Mesa, AZ 85211
United States
Contact
Email: humanist@hsgp.org
Download iCalendar entry for this event. iCalendar feed for this event.

Please help us and let your friends, colleagues and followers know about our page: Sunday Speaker: Lee McIntyre - How to Talk to a Science Denier