Panel Discussion: How to Grow Diversity Within the Secular Movement

Special Event
You don't want to miss this event! 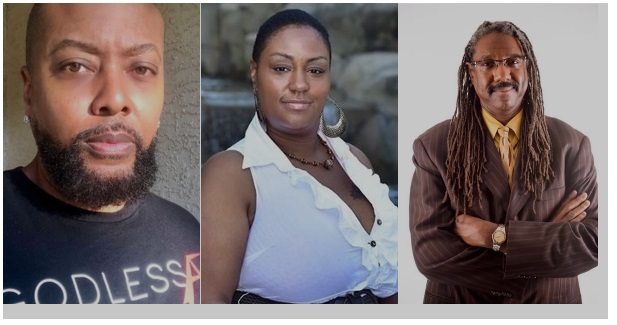 These amazing panelists will talk about how to grow diversity within the secular movement, a subject of great importance and interest to all of us. There will be a Q&A period.

After our Sunday Speaker meeting, featuring Mandisa Thomas, we will take a break and begin the panel discussion at 12:30.

ROBERT PEOPLES (Moderator) is founder and Chair of Affinis Humanity Coalition (AHC); a nonprofit organization that normalizes Humanism one narrative at a time, and a Board Member of Secular Coalition for Arizona. He is a New Jersey native and currently resides in Tempe, Arizona. Prior to establishing the AHC, Robert operated a successful secular apparel line; making it to the semi-finals of “Phoenix Raw: natural born artists” fashion show. In the greater Phoenix area, he operated as a contract policy writer for the Department of Economic Security (DES). He also functioned as a corporate Diversity and Inclusion trainer for one of the largest behavioral health companies in Arizona. Through photography, video campaigns, and school presentations, he has reached national and international communities to bring awareness of the benefits of Humanism.

MANDISA THOMAS In 2011 she co-founded Black Nonbelievers of Atlanta, with "Atlanta" later dropped after a decision to expand the organization. In 2013 she was one of the principal organizers for the Blackout Secular Rally. As president of Black Nonbelievers Inc., Thomas urged people to "come out and stand strong with their nonbelief. ... The more we make our presence known, the better our chances of working together to turn around some of the disparities we face. We are not alone."

Thomas serves on the board for American Atheists and is board and for the American Humanist Association. She previously held board positions with the Foundation Beyond Belief, the Secular Coalition for America and the 2016 Reason Rally Coalition. She was named the Unitarian Universalist Humanist Association’s 2018 Person of the Year and as a Freethought Heroine in 2019 by the Freedom From Religion Foundation. She regularly presents at conferences nationwide and has appeared on major media such as "CBS Sunday Morning" and CNN and has been featured in JET, Playboy and The Humanist magazines and other print and online media, including FFRF’s “Freethought Matters."

Free and open to the public.

Please help us and let your friends, colleagues and followers know about our page: Panel Discussion: How to Grow Diversity Within the Secular Movement